You are here: Somerset Microlights > Training > The Aircraft

There are two types of Microlight

There are basically two types of microlight. The fixed wing (3 Axis) and the flexwing (weightshift) aircraft. Both types come in single or two seat form (to compare their various specifications, you’ll find a list of some of them at the bottom of the page). 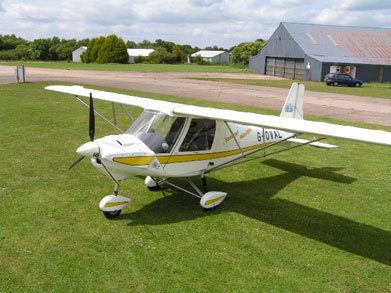 The fixed wing is effectively a small conventional aircraft. The wing is fixed to the aircraft and has ailerons to control the roll and and elevator to control the pitch, the 3rd control being the rudder that controls the yaw, hence the term ‘3 axis’. These control surfaces are controlled by a control column (stick) and two rudder pedals requiring the coordination of the hands and feet.

The fixed wing market is divided into home built and kit built aircraft, regulated by the Popular Flying Association (PFA) and factory built planes which are regulated by the British Microlight Aircraft Association (BMAA), they are built to a very high standard. The price difference between the kit built and factory aircraft are not as great as you may think and remember, a kit plane may take some 500 hours to build. Some fixed wing aircraft are difficult to rig and are therefore best kept in a hangar or on some sort of trailer.

Prices of 3 axis microlights range from around £200 for a set of aircraft plans to build from scratch, up to £80,000 for a top of the range factory built aircraft. An average microlight kit can be bought for around £9,000. Many people split these costs by buying shares in an aircraft, these are often available and an average cost is around £4000 to £6000. 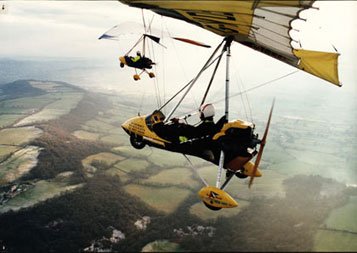 The flexwing microlight is derived from the hang glider and although flexwing technology has progressed far and very quickly, it still has that increasingly rare pioneering feel about it. The aircraft consists of a moveable wing that pivots on the ‘trike’ unit so that wherever the weight of the trike is put, the aircraft will roll or pitch in that direction.

These inputs are made via a single horizontal bar in front of the pilot . The flexwing has a more ‘open to the elements’ feel than a fixed wing and is much simpler in construction. This allows it to be easily dismantled by one person to fit on a small trailer in around half an hour. Although it is possible to build a flexwing yourself, it is very rarely done as there very few kits currently on the UK market, so almost all flexwings are factory built and regulated by the BMAA.

Flexwing prices range from around £4,000 second hand to around £48,000 new and modern engines are very powerful, yet quiet and economic, giving suprising long distance capability. The flexwing also has very good short field performance and can generally out climb a fixed wing aircraft.

The flexwing has no rudder therefore has no yaw control which makes it a little more difficult to land in a crosswind. The fixed wing aircraft has a rudder so can be kicked straight when landing, however the flexwing’s lack of rudder and tail means it cannot spin.

Why not check out our article here on when Jim landed his flex wing on the roof of a lorry!!!!! (All approved of course)

You can see some sample performance data on a range of microlights by clicking on one of the pictures below.

We at Somerset Microlights are happy to undertake most of your maintenance requirements, servicing etc.